Prof Nick Robins, London School of Economics, looks at the dynamics of a just transition away from fossil fuels.

If there is one thing that the brutality of the COVID-19 pandemic has taught us, it’s the importance of shared endeavour in the face of a disruptive shock. The same is true for the existential threat of climate change, whose physical impacts are already disrupting lives and livelihoods across the world, spurring countries, companies and communities to step up the race to net-zero.

Long championed by the trade union movement, the just transition is now also becoming a shared endeavour. Five years ago, the Paris Agreement recognised the imperative of placing the interests of workers and communities centre-stage so that decarbonisation brings decent work and quality jobs. All the evidence suggests that the creation of the net-zero economy offers huge potential to create both more and better jobs, thereby contributing to ending the poverty and inequality that hold back the global economy.

Looking at energy, for example, the sector employed almost 58 million people﻿ worldwide in 2017. According to IRENA, this could rise to 100 million﻿ under its Transforming Energy Scenario, which would set the energy system on the path needed to keep the rise in global temperatures to well below 2°C and closer to 1.5°C during this century. This generates 15% more jobs than IRENA’s conventional Planned Energy scenario, led by renewables, energy efficiency as well as power grids and energy flexibility. This shift is already underway with renewable energy jobs growing by 500,000 to 11.5 million﻿ in 2019.

This expansion in employment, achieved in ways that provide fair incomes for workers and better prospects for communities, will not happen automatically, however. Too often, the climate agenda has been socially blind, introducing policy interventions with little regard for the impacts on employment, or indeed on consumers. As one of the gilets jaunes protesters in France memorably remarked, “You care about the end of the world; we care about the end of the month”.

A critical success factor for net-zero

That is why the just transition is rising to the top of the agenda as the connective tissue that binds together climate goals with social outcomes.

First of all, it is simply the right thing to do, making sure that longstanding human rights are realised in the transition, not least the right to participate in decision-making in the workplace. Second, a just transition is essential to build the political support for the changes that are needed, overcoming the understandable anxiety of those who fear that they could lose out. Workers in high-carbon sectors tend to support﻿ green policies when they believe that credible alternatives exist. This was confirmed last year in a survey of oil and gas workers﻿ in the UK, where over 80% said they would consider moving to a job outside the sector. Given the option of retraining to work elsewhere in the energy sector, more than half said they would be interested in renewables. As one worker put it: “moving into renewables is something to feel good about.”﻿

COVID-19 is intensifying the importance of translating the just transition into a practical reality for the global energy system. Global coal production﻿ peaked two years before the Paris Agreement and 2019 looks set to be the peak for oil production﻿. In 2020, oil corporations made historic writedowns as they realised the looming risk of ‘stranded assets’ on the road to net-zero. Sharan Burrow, General Secretary of the International Trade Union Confederation (ITUC), has said that it is essential that this economic restructuring does not result in ‘stranded workers’ and ‘stranded communities’﻿.

The key ingredients of what makes for a just transition are well established﻿: social dialogue in the workplace, along with respect for labour standards and human rights, economy-wide skills development and retraining, buttressed by social protection and safety nets. As many of the core high-carbon sectors are clustered in specific places, community renewal and regional development are crucial, along with macroeconomic strategy to connect the just transition with key climate policy levers (such as carbon pricing). In addition, a special focus needs to be placed on small and medium-sized enterprises, both along supply chains and in regional economies. Turning the just transition into everyday reality is clearly a tough challenge. Even before COVID-19, the global economy was marked by a set of ‘decent work deficits’﻿ that confront the 3.7 billion people who are either employed or could be in a job.

There are growing examples, however of leaders across government, business and society demonstrating how this challenge can be met.

In the European Union, Commission President Ursula von der Leyen﻿ has placed the just transition at the heart of its Green Deal, introducing a dedicated funding mechanism, stating that “the transformation ahead of us is unprecedented. And it will only work if it is just – and if it works for all”. In South Africa, President Cyril Ramaphosa﻿ has committed to draw up a just transition plan backed with a just transition fund so that measures are in place for “workforce reskilling and job absorption, social protection and livelihood creation, incentivising new green sectors, [and] diversifying coal dependent regional economies”.

In a striking departure from the previous US administration, President Joe Biden has made job creation the centrepiece of his climate strategy, stressing that these must be “good-paying jobs that provide workers with the choice to join a union”, adding that he will also focus on “delivering justice for communities who have been subjected to environmental harm”. This commitment has been embedded into Biden’s $1.9 trillion stimulus package signed in March 2021, and in two infrastructure bills amounting to a further $3 trillion. These steps are supported by a large civil society platform calling for 40 percent of climate investment to benefit disadvantaged communities.

The agenda for the UK

In the UK, by contrast, the government has yet to introduce a comprehensive commitment to the just transition as part of its drive to a net-zero economy. North of the border in Scotland, a Just Transition Commission has recently recommended a raft of measures to make climate action ‘fair for all’. A similar body should be established at the UK level to set out how greening our energy, homes, industry, land and transport systems can be shaped to reduce deep inequalities that have been exacerbated by the COVID crisis. For example, a just transition plan for North Sea oil and gas is required to phase out exploration and production in ways that improve the lives of workers and communities. A comprehensive Green Home funding programme is also needed, building a high-skilled and empowered workforce to retrofit every building in the country, with special focus on upgrading homes for low-income families. A strong place-based dimension will also be needed to ensure that net-zero plans respond to the different community needs: this could help to give some substance to the government’s desire to ‘level up’ the economy. As in the US, an ambitious UK government policy around the just transition would be welcomed by civil society, as well as by many in the financial community.

Nick Robins is Professor in Practice for Sustainable Finance at the Grantham Research Institute on Climate Change and the Environment, London School of Economics.

This article covers the ground of the contribution made by Prof Nick Robins to the SGR conference 2020, and is based on a Commentary written for the Grantham Institute. 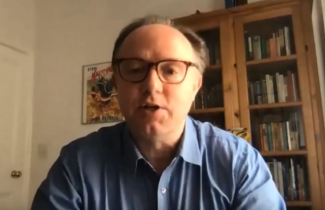