Skip to main content
The mirage of zero-emissions flying

Finlay Asher, Safe Landing, assesses the technical obstacles to the decarbonisation of aviation - and finds they are substantial.

Globally, the civil aviation industry plans to double in size before 2040 and possibly again by 2050. If this happens, we could see aviation fuel consumption and therefore greenhouse gas emissions triple by 2050. Both corporate and government leaders use unrealistic and distracting promises of technological solutions to greenwash this growth. In this article, I examine these claims and debunk common myths and misconceptions using a set of factsheets produced by the campaign group Stay Grounded, which summarise evidence from technical, academic and industry sources. [1]

Key players within the global civil aviation industry have recently released a series of joint statements declaring a shared sustainability strategy. Airline lobby groups such as ATAG, and fossil fuel companies such as Shell have also produced aviation roadmaps with similar strategies. Despite the dip caused by COVID-19, these all show an unequivocal return to pre-pandemic levels of flying within a few years, and then a return to the rapid air traffic growth of previous decades. This growth is underpinned by the same repeating elements: conventional aircraft and airline efficiency improvements, alternative technology such as electric or hydrogen powered aircraft, and alternative jet fuels such as biofuel and electrofuels.

Aircraft efficiency refers to the amount of fuel burned (and emissions produced) by an aircraft in order to transport its payload (passengers or cargo) a given distance (e.g. one kilometre). Efficiency improvements (i.e. reductions in fuel burn) are achieved by optimising the design of the aircraft, the engines, the airline operations (e.g. the flightpath) and by increasing the amount of passengers or cargo carried onboard the aircraft. Efficiency - the mass of fuel per passenger-km - is directly proportional to CO2 emissions per passenger-km, with 1kg of fuel emitting 3.16kg of CO2.

Figure 1 shows that in a poorly-regulated industry, efficiency improvements may facilitate market growth and increase total emissions, not reduce them. This is known as Jevon’s Paradox. Thus, efficiency gains alone cannot be relied upon to decarbonise the industry – we also need regulations to limit air traffic.

The Earth's atmosphere isn’t affected by individual aircraft efficiency, but instead by total emissions produced. This has been rapidly increasing, rather than decreasing. 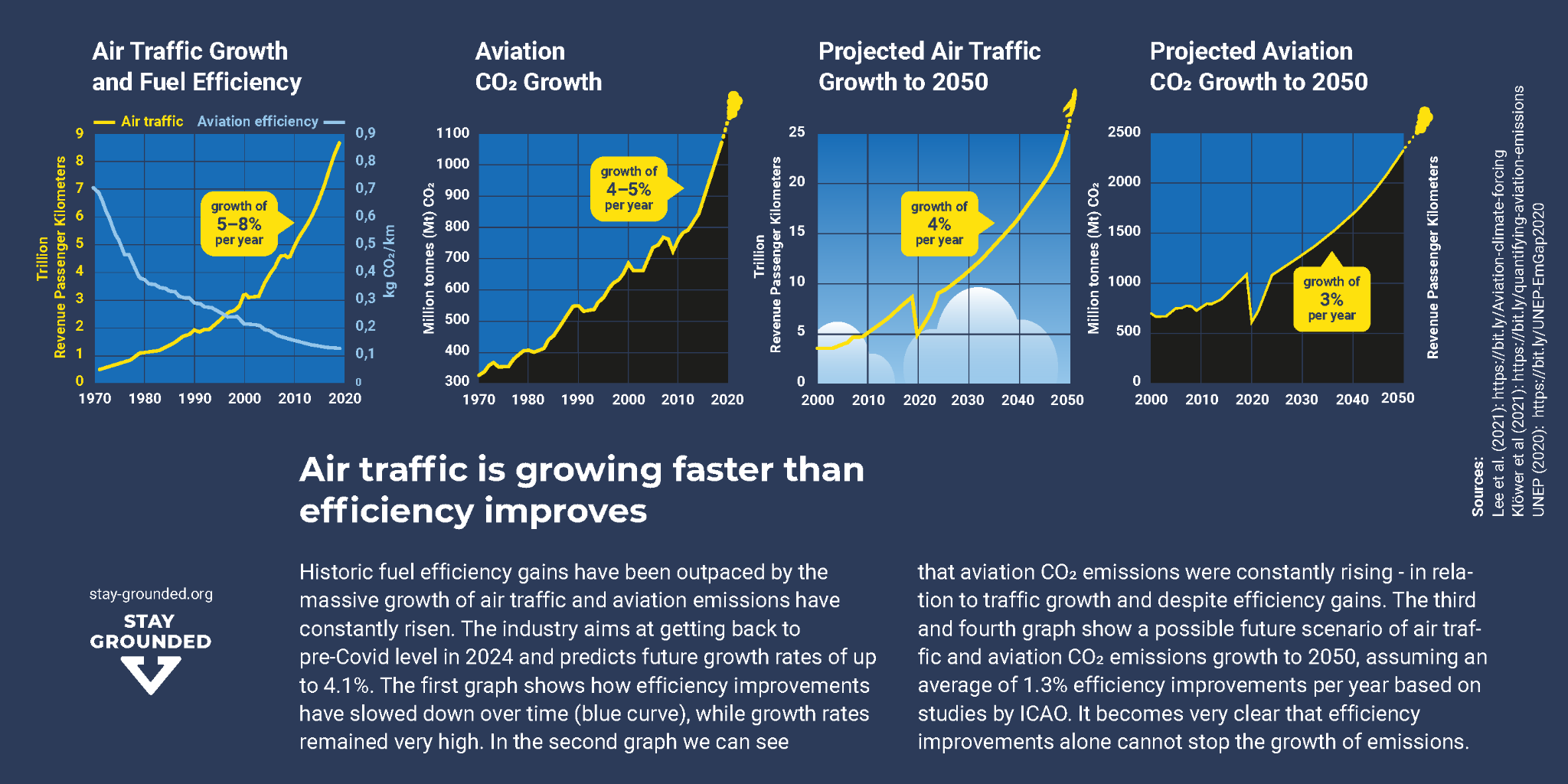 In ‘fully-electric’ aircraft, these motors are powered by electrical energy provided directly from batteries. Often such aircraft are described as ‘zero emissions’ as they have zero tailpipe emissions but this is somewhat of a misnomer as the production and re-charging emissions of batteries will remain significant for the foreseeable future.

Current batteries and electrical systems are far too heavy to displace most jet fuel and combustion engines - see Figure 2 - so it’s likely that only very small electric aircraft will be certified before 2050. This is reflected by the fact that most companies attempting to certify electric aircraft during the 2020s are developing aircraft carrying less than 10 passengers which don’t generally fit the current configuration of most airports. In addition, unlike a fuel tank where the weight decreases as fuel is burned during the flight, a battery does not become lighter during the trip. These issues further impact the payload and range capability of the aircraft. 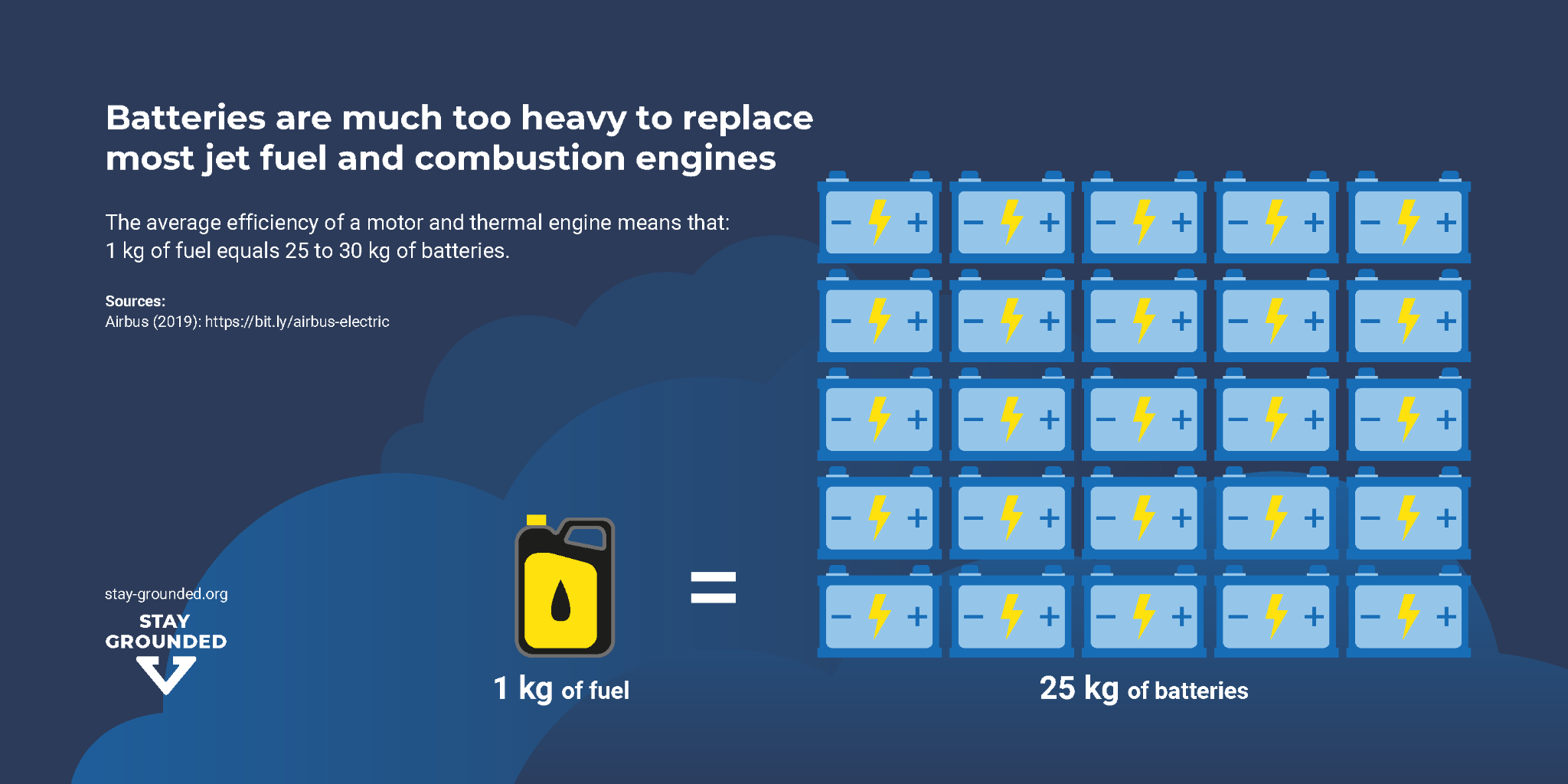 Currently this means that electric aircraft will likely only be viable for short flights under 1,000 km by 2050 which account for a small fraction of aviation CO2 emissions.  However, the scope to decarbonise overall aviation emissions is even more limited because, although electric aircraft can be justified for some niche cases in regions where ground transport options are poor, such as remote island or mountainous regions - everywhere else short-haul flights can be substituted by more efficient public transport options on the ground.

Hydrogen can either be burned in a jet engine (hydrogen combustion) or used to generate electricity in a fuel cell to power a propeller (hydrogen-electric). It is produced from other energy sources, is very energy-intensive to produce, and is stored in liquid form at -253°C. While hydrogen power produces zero CO2 emissions, other non-CO2 emissions such as nitrogen oxides (NOx), water vapour and contrails are still produced which result in global heating. It’s estimated that hydrogen combustion could reduce the total climate impact by only 50-75% and hydrogen fuel cells by 75-90% versus jet fuel.

Hydrogen flight is unproven, with many technical and safety aspects yet to be understood. The main design issue is fuel storage as even liquid hydrogen has a volume over four times larger than jet fuel for an equivalent amount of energy. Boeing are sceptical and even Airbus has admitted that hydrogen will not be widely used in planes before 2050, stating that only regional 50-100 seaters would be ready for hydrogen in the 2030s, a small market with a small share of emissions. If airlines transition to using a large amount of such aircraft, this will substantially affect their operations and the design of airport infrastructure (e.g. runways, gates, terminals, fuelling and maintenance requirements). It would therefore be sensible to halt aviation expansion plans until we know to what extent hydrogen aircraft will be used.

The biggest issue with hydrogen aircraft is the timescale. Novel aircraft have a typical design, development and certification time of 15-20 years and a lifetime of more than 25 years. The production of a new fleet of hydrogen aircraft and conversion of airport infrastructure would start too late and take too long to have any significant impact on aviation decarbonisation over the next two crucial decades.

Alternative jet fuels or so-called ‘Sustainable Aviation Fuels’ (SAF) are liquid hydrocarbon fuels that can be used with existing aircraft in place of kerosene produced from fossil fuels.

The premise of their sustainability is to create fuel using CO2 taken from the atmosphere, rather than using fossil fuels extracted from deep underground that will then emit additional CO2 to the atmosphere when burned. The argument is that blending these fuels with fossil fuels would therefore reduce emissions.

They can be broadly categorised into two varieties:

While it’s promised that these fuels could be scaled-up rapidly to a significant percentage of total consumption, this has already been promised by the industry for more than a decade but currently less than 0.01% of jet fuel is from alternative sources. Second generation biofuels and e-fuels are likely to only replace a small percentage of fossil fuel use in the near-future.

Even if scaled up further, alternative jet fuels will still cost far more than kerosene. Biofuel from ‘waste oil’ is the most cost competitive but still costs double the price and other biofuel and e-fuel processes cost as much as eight times the price. The only way the aviation industry can continue to grow whilst using larger quantities of alternative jet fuels, would be to obtain large government subsidies for their production. According to a 2019 ICAO study, 328 new large bio-refineries would need to be built every year by 2035, at a cost of US$29-115 billion a year to supply international aviation alone.  However, investing in such refineries would pose a huge risk to taxpayer money as it’s unlikely, for the reasons given here, that alternative jet fuels will always be viewed as ‘sustainable’. This could result in facilities turning into ‘stranded assets’.

The industry claims that “SAF can reduce emissions by up to 80% during its full life cycle”. However, greenhouse gas savings of only 60% have been proposed at national levels as a threshold for ‘SAF’ and fuels eligible under the international CORSIA scheme can have savings as low as 10%.  In addition, aviation also produces non-CO2 emissions such as contrails which are estimated to cause a greater global heating effect than aviation CO2. Recent studies have shown that while alternative jet fuels can contribute to reducing non-CO2 emissions, they will only be partially reduced. So even where they are used in place of fossil fuel, significant emissions will still be generated.

The aviation industry often claims that it will only use second generation biofuels from ‘sustainable waste’ that won’t compete with agriculture or cause adverse environmental or social impacts. However, it hasn’t ruled out the use of first-generation biofuels, which can cause land-use change emissions, biodiversity loss, rising food prices, and water scarcity. There are plans for huge ‘SAF’ refineries in Paraguay using soybeans as a feedstock and such fuels are permitted in the Carbon Offsetting and Reduction Scheme for International Aviation (CORSIA), which is the only internationally agreed policy and runs until 2035. There is a very limited quantity of ‘sustainable waste’ available globally for second generation biofuels - this could also be used more efficiently to decarbonise other sectors and there are many competing uses such as for organic fertiliser, biodiesel for ground-based transport, and Bioenergy Carbon Capture and Storage (BECCS). 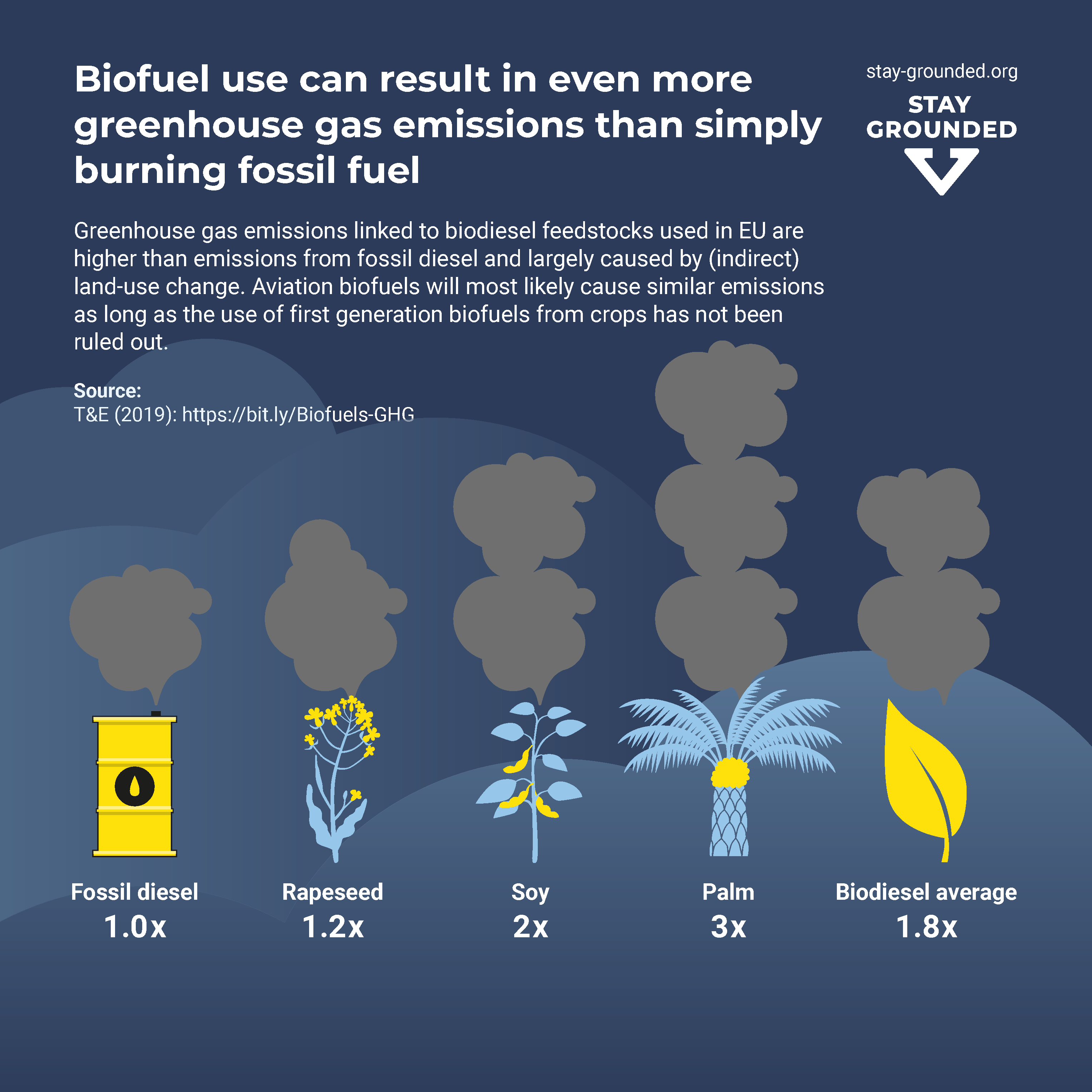 E-fuels can be produced by combining hydrogen with carbon to create a liquid hydrocarbon. Hydrogen must be extracted from water by electrolysis and carbon extracted from the air using a process called 'Direct Air Capture' (DAC). These can then be combined into a hydrocarbon fuel using a chemical process called Fischer-Tropsch (FT) synthesis. In order to minimise emissions, these processes must all be powered with renewable energy.

Although the technology has been demonstrated, it’s still at the pilot stage and several decades of heavy investment would be needed to scale up production. The production is also extremely energy-intensive. No more than about 10% of the renewable electricity input would eventually be converted into thrust to move an aircraft, whereas it can be used far more efficiently in many other applications as shown by the UK Climate Change Committee [7] - see Figure 4. 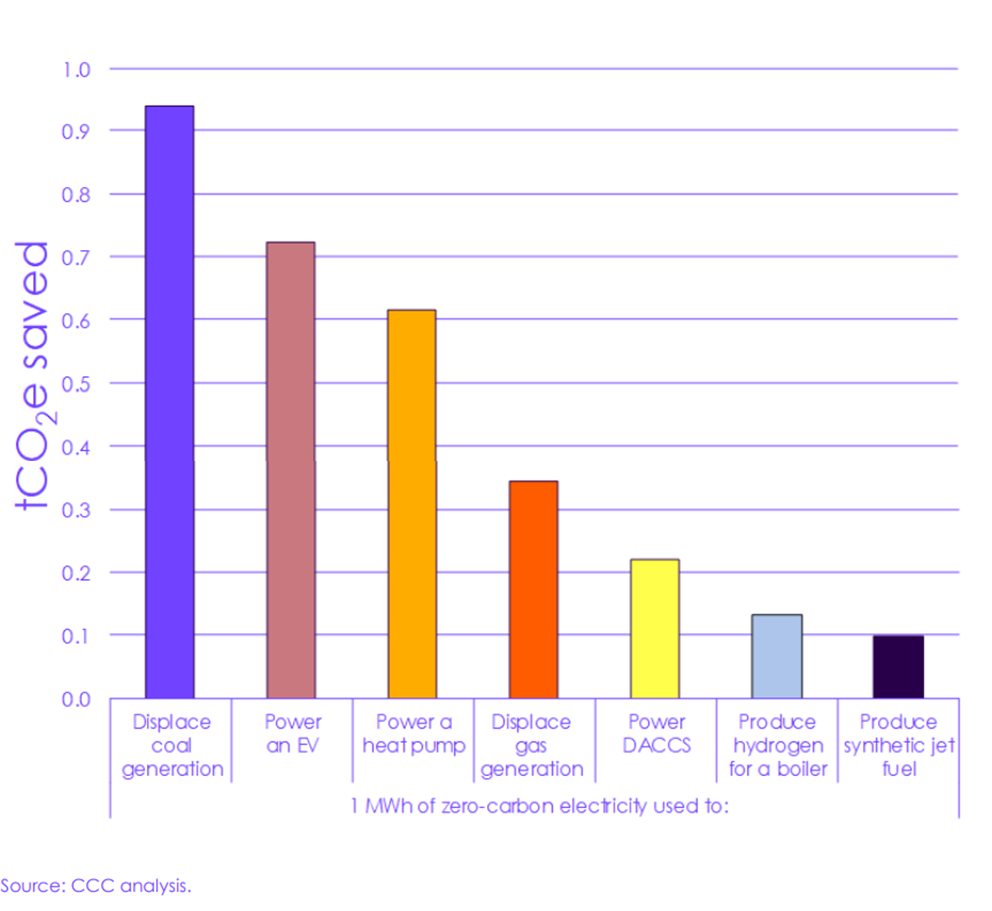 In a scenario where 100% of the airliner fleet would use e-fuels, the resulting electricity demand would be 2.5 times higher than current global renewable energy production and about 5 times higher if air traffic growth continues to 2050. As demand for electricity grows, so does the risk that renewable electricity supply won’t be able to match it, prolonging the use of fossil fuels.

All technical options for reducing greenhouse gas emissions from aviation have serious limitations. While the development of new technologies is helpful, it cannot be an excuse to delay immediate emissions reductions to mitigate the climate crisis and meet the goals of the Paris Agreement. The only way to effectively reduce aviation emissions is to reduce air travel.

Finlay Asher is a campaigner with Safe Landing, www.safe-landing.org. He used to work for Rolls-Royce as an aircraft engine designer. 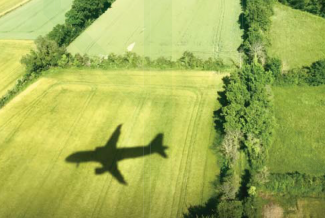