Skip to main content
The psychology of cutting plastic pollution

The BBC’s Blue Planet II series has given a welcome boost to public awareness of plastic pollution in our oceans. The images of fish and divers swimming through a soup of plastic waste have both enraged and inspired people, some of whom have been modifying their personal behaviour by refusing, reducing, re-using and recycling single-use plastic. It also is one of the issues that the UK government tackles in its 25-year environment plan, while the BBC itself is now aiming to phase out single-use plastics at all its sites by 2020.

These moves by government, businesses and individuals are laudable, but there is still much to be done. There are many places where psychology can play a part in enabling behaviour change to enhance the technology and policy that is still to be implemented.

Learning from the plastic bag tax

Plastic has become ubiquitous in our modern lives. But the properties that make it so useful – like durability – are also the ones that create environmental problems. We have developed a ‘disposable’ lifestyle where around 50% of plastic is used just once and thrown away. According to Greenpeace, up to 12 million tonnes of plastic ends up in our oceans every year – that’s the equivalent of one rubbish truck every minute. Once in the ocean, it can kill wildlife through, for example, suffocation or clogging animals’ stomachs.

There are many contributors to this plague of plastic waste – an obvious example being the plastic bag. One piece of legislation has already been successful in cutting down the number of plastic bags being used – the mandatory 5p charge per bag. There are now proposals to introduce a charge on other single-use plastics, such as disposable coffee cups.

Around 2.5 billion disposable cups are thrown away each year in the UK – the equivalent of 5,000 every minute. These cups are difficult to recycle or compost as they are usually a blend of cardboard and plastic to make them waterproof. The so-called ‘latte levy’ is a suggested charge of 25p on each cup. Would this help to tackle the
waste created by the ‘take-drink-dispose’ culture? The difference between the plastic bag tax and a latte levy is that the consumer then ‘owns’ the plastic bag and can use it again – and it can be recycled. With a coffee cup, once you have paid your 25p, you have nothing else to show for it – and you still need to dispose of the cup – to landfill! So a charge on coffee cups may give a nudge to consumers to move away from the throwaway culture, but it is unlikely to bring about lasting change in isolation.

It is therefore important to use a combination of measures. If the cups were also recyclable or compostable, this would help reduce the waste. But if we went one step further – and made them reusable – this would make the biggest difference of all. But this would require a greater level of behaviour change by the coffee drinker.

How can psychology be used to help?

The writer George Marshall points out some of the reasons why we are not motivated to act.1 The first is the lack of a personal connection to the issue, for example, ‘I do not throw plastic waste directly into the ocean’. The second is absence of an abrupt change, in that it takes years for plastic waste to build up in the environment. The third reason relates to immorality. If we do not see, or are unmoved by, pictures of seabirds with stomachs full
of plastic waste, we will not act. Finally, there is the question of immediacy. Does the plastic waste affect us now? The acronym, ‘pain’, has been suggested to summarise these four obstacles to our motivation to act – personal, abrupt, immorality and now. Effective action needs to take these four into account.

Having the motivation to change is important, but it must be supported by the opportunity and the capability to change. I might want to refuse plastic – but if all the items in the shop are packaged in plastic, my options are limited. What could be done to help individuals make better choices?

Knowledge is the first step. This is where Blue Planet II has played a huge role in raising awareness. But education on its own is not enough to ensure behaviour change happens.

Next the physical environment can be designed such that it is easier to choose the environmental option. Some of this will rely on suppliers and retailers rethinking how they offer their products. Minimising packaging, making it from easy-to-recycle or compostable materials, and clear labelling on how/where to recycle all help. Technological innovation and legislation can have a particular effect here.

There are also actions that can be taken at the point of purchase of our drink that change the default option to an environmental one. If the aim is to make the default bringing your own cup, then retailers could take a number of actions. Firstly, the advertised price would be for the reuse option, and an extra charge would be made to include a throwaway container. The server could be trained to ask, ‘Do you have your own cup?’ as an initial question. To make bringing your own container more desirable, they can be made to look more attractive. Indeed, this is already being done by some outlets.

These actions take advantage of some important psychological concepts: ‘social norming’; and ‘loss aversion’. A social norm is ‘what people like you’ do. As Griskevicius and fellow researchers found,2 social acceptability and what ‘normal’ people do was effective in encouraging behaviour change. Meanwhile, psychological research has also demonstrated that people are especially keen to avoid experiencing a loss. Hence an extra charge for choosing the less environmental option is more likely to drive social change. This experience is borne out by the plastic bag tax.

Introducing changes are more effective if they are done in a timely manner. The current public concern about plastic pollution makes this an ideal time to make re-usable cups and bottles the ‘normal’ option. Policies encouraging behaviour change can be powerful in helping to deal with the problem of plastic waste. However, they need to be used wisely, with a combination of carrots and sticks, and top down and bottom up strategies, to be effective.

Dr Jan Maskell is a chartered occupational psychologist, and vice-chair of SGR. 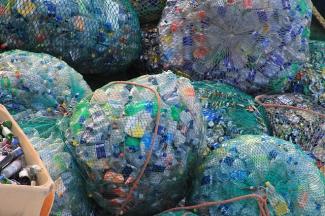