Skip to main content
A short dictionary of war terminology

Dr Stuart Parkinson, SGR, looks at how the language used to describe war – including that in Ukraine – can mislead and obscure the situation. He provides a short guide for cutting through the information fog.

It’s often said that the first casualty of war is truth so, as the six-month anniversary of the Russian invasion of Ukraine passes, I thought it would be useful to reflect how the war – and the weapons being used – have been described by politicians, journalists, commentators, and military figures depending on whose side they support. And it’s also useful to look at parallels between this and other wars.

Some of the terms will be familiar to those who regular monitor war communications, such as ‘freedom fighters’ versus ‘terrorists’, or the military term ‘collateral damage’ being used to gloss over civilian casualties. Others, however, such as ‘fighting in the grey zone’ are much more recent developments.

In this particular war, there are elements that I’ve found striking. For example, there are parallels between the terms used by the Vladimir Putin government to justify and describe this illegal invasion and those used by the George W Bush government concerning the illegal US-led invasion of Iraq in 2003. Another is the use of terms to describe weapons and their deployment. So there are similarities between Putin’s nuclear threats and, for example, past nuclear threats made by the US and UK governments. A further example is the use of the term ‘precision weapon’ to describe a guided bomb or missile. Even if electronic guidance systems for some of this equipment are more accurate than in the past, is it really reasonable to describe weapons carrying (typically) half a tonne of explosives as precision?

The table emphases the importance of looking beyond nationalist rhetoric to both the complexity of the political roots of conflict and the human suffering and environmental damage caused by all wars. As the war in Ukraine continues to drag on, causing immense suffering both inside Ukraine and far beyond through its economic shocks, the importance of finding a political breakthrough to end the fighting has never been greater.

Dr Stuart Parkinson is executive director of Scientists for Global Responsibility (SGR). Formerly an engineer in the arms industry, he has written on peace and conflict issues for over 20 years.

1. I don’t claim this as a robust academic exercise, merely a subjective monitoring of the media over the last six months and beyond. 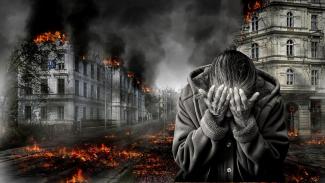