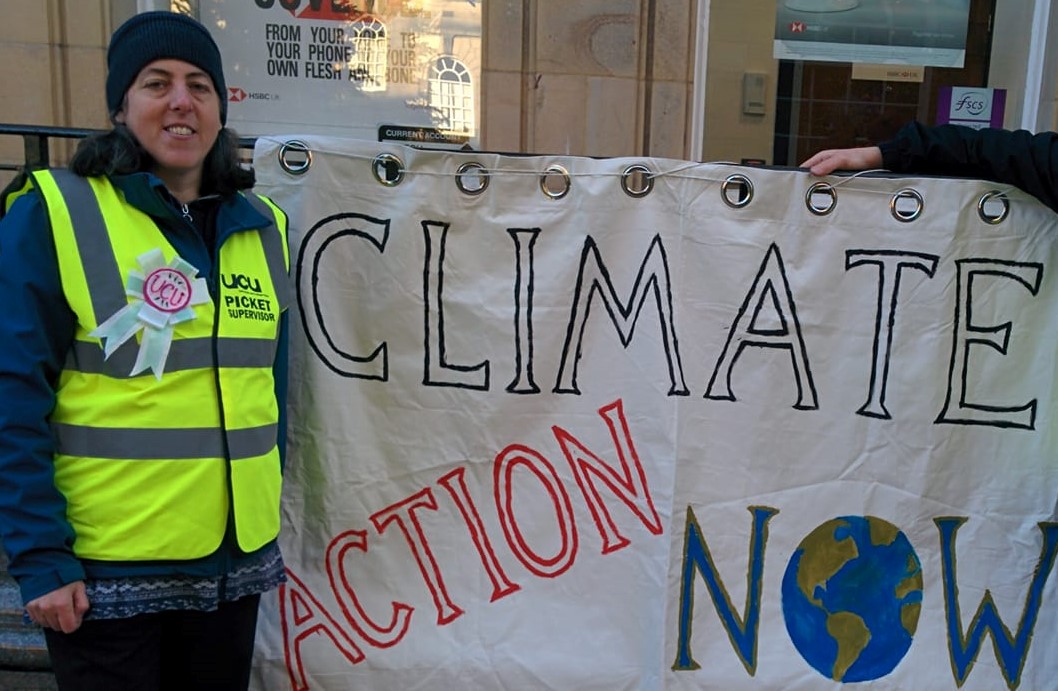 I have had a varied career including being a Lecturer in Earth Sciences, a City Councillor, and an Office Manager for a science-based non-governmental organisation.

After leaving school, I chose to study for a Bachelor’s degree in Geophysical Sciences (BSc) at university - without a particular career in mind, but just because it was interesting. I then did a Doctorate (PhD) in Geochemistry, vaguely intending to become a volcanologist or research scientist. However, while I was a postgraduate student, I got very interested and involved in local environmental activism. It became clear to me that geoscientific research would involve a lot of travel, and a willingness to move around in pursuit of career opportunities (i.e. mostly short-term contracts). That didn’t seem compatible with living a low-carbon lifestyle and putting down roots in a community.

I decided to pursue two parallel career options – teaching Earth Sciences at undergraduate-level (including natural hazards) and getting elected as a local councillor for the Green Party, both of which I did successfully for many years.

Councillors do an amazing variety of activities, from knocking on people’s doors to find out what they think, to supporting community groups, and making policy decisions about land use, transport, housing, waste, and much more. It was really satisfying to see visible improvements happening in my neighbourhood which probably wouldn’t have happened without my input and that of my fellow Green councillors. Although a scientific background wasn’t essential for this role, I had lots of transferable skills that proved useful.

After stepping down as a Councillor, my activism became more directed towards my university workplace. I became a Trade Union Officer and chaired a Faculty Sustainability Committee. I led a successful campaign to persuade my university to declare a climate and ecological emergency and set targets for reducing emissions to net zero by 2030-2035.

I juggled two or more different roles for a long time, but during the Covid-19 pandemic I worked mainly from home and realised that I didn’t want to go back to such a hectic working life. Also, I really wanted to work for a more ethical employer, having seen the higher education sector gradually becoming very income-driven, managerial and exploitative of its staff.

What is important to me

In 2021 I decided to leave my university job, and got a new part-time job as Office Manager for Scientists for Global Responsibility. I manage the organisation’s finances and membership. I’m really enjoying having a much better work-life balance, no commuting, and being part of a small team who share the same values.

I am also helping a non-governmental organisation that is striving to use science and technology to make a positive difference to the world, and that feels good.

A key decision that I made at the start of my career (and have stuck to ever since) was not to work full-time. I would recommend this to everyone! By working part-time, I could earn enough to pay the bills while leaving enough time to be an effective activist. I earned a lot less than I could have done, but a green lifestyle is not expensive. I don’t have any children and I don’t drive or fly or buy lots of stuff. I rented a room in a shared house for many years while saving up to buy a small house with a mortgage – easier to do in the north of England than in the south.

My advice is to…

Work out how little money you need to live sustainably and happily, and work part-time and car-free if you can.

Choose an employer whose values align with your own – judging by what they actually do rather than what they say they care about.

If your employer is not as ethical and sustainable as you would like, do what you can to encourage them to change. You could do this through a trade union, and/or seek other opportunities to be involved in the organisation’s governance and help to shape its culture. You might be able to link it to your own professional development too. If they won’t change, you can always move on.